CES in the German Bundestag for 20 years 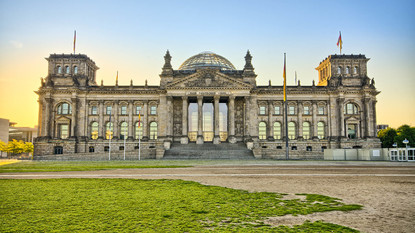 On 19 April 1999, the keys of the old and, at the same time, the new Reichstag building were symbolically handed over. In September of the same year, the German Parliament had completed its relocation from Bonn to Berlin, and since then it has been using the historical building as its seat.

Weckbacher, CES partner and security specialist, had won a Europe-wide tender and was awarded the contract for planning, delivering and installing a grand master key system.

In close co-operation with CES, the complex locking system was planned and designed in such a way that its use could easily be expanded.

In accordance with the concepts developed by the architect Sir Norman Foster, the building, which dates back to 1894, was fundamentally transformed. Today, the parliament building is accessible via four entrance areas, and it consists of three upper floors, one mezzanine floor, and a characteristic glass dome. The plenary hall is located in the centre of the building and opens up to the glass dome. A vast number of rooms, such as assembly rooms for the Chancellor and the Federal President, the parliamentary groups, for the President of the Federal Parliament and their staff members, information rooms for visitors and press members, and many more, need to be opened and closed.

In the beginning, the grand master key system comprised around 10,000 cylinders and more than 50,000 assigned keys. Meanwhile, the system has been grown to over 25,000 cylinders and 125,000 keys. Over the years, additional buildings such as the Paul Löbe building, the Marie Elisabeth Lüders building and the Jakob Kaiser building, have become part of the German Parliament building. Originally the locking system was purely mechanical, but through the integration of electronic locking devices it has morphed into a mechatronical locking solution.

Because of the far-sighted planning of the grand master key system, which took into account future expansion, the end of the road hasn't yet been reached. In the future, particularly after elections, access authorisation will change, keys will change hands and further electronic locking components will be integrated without any safety gaps: this locking system keeps growing and growing.